Derek Bodkin is a Monterey Bay California based Singer Songwriter. His eclectic Musical history ranges from playing drums with some of the Bay Area's hottest improv jam-fusion artists to playing fingerstyle guitar and bluegrass banjo with many shining folk rock artists touring today. Derek brings a special 'mojo' to the stage to make the listener feel right at home.  In September 2017, Derek competed in the Master's of Musical Whistling competition held in Los Angeles and won 5 trophies, including Masters of Musical Whistling WORLD CHAMPION 2017.

On his first solo album, “True Story”, Derek shares his love for Musical tradition, collaboration, and storytelling as well as a penchant for memorable melody writing. He brings these songs to life with the help of his most talented friends known as "The Hovering Breadcat Folk Ensemble".  Through his music, this songsmith will find his way into your head and heart.  His newest album "Hooptie" is now available!

The Hovering Breadcat Band is a spirited group of fun people who take any song and make it their own.  The band has an array of creative covers and thought promoting originals.  See our Press Kit tab for a full description of the band!

We return again to the best venue to appear in quite some time... Club Green Room. A live music supporting venue with a fantastic staff, unique vibe, terrific food and great ambience. Join us for a dinner set from 5pm to 7pm

After canceling their last shows planned for St. Patrick's Day two years ago - Hovering Breadcat is back! The VERY NIGHT of the show at The Crepe Place in 2020 was the announcement of the shutdown. We're glad to return to The Crepe Place - a special venue carrying on the tradition of supporting live bands, outside of the same old thing happening everywhere else in town. Join us for this special and festive night of music! 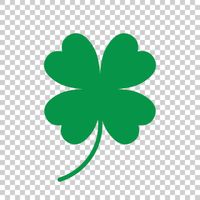 Hovering Breadcat is back with our own unique style of St. Patrick's Pub songs, Sea Shanties, and special originals! Join us for a great night of festive Irish spirit, banter and some great fellowship.

Come out and support live music. Bring a mask.

M Jones and the Melee is a rock band based out of Oakland, CA. Fronted by guitarist, singer and songwriter M Jones, their theatrical performing style has been likened to that of Nick Cave and the Bad Seeds.

Sabertooth Unicorn Originally created as an outlet for the darkly-comedic lyrical musings of front man Vince Lay, Sabertooth Unicorn has quickly ballooned into a growing menagerie of wildly talented musicians. They are a supergroup of seasoned and diverse players, and their high energy live show is an always unpredictable party. From folk rock anthems to Circus punk sing-and-dance-alongs, the Sabertooth Unicorn show leaves no stone unturned in their mission to celebrate the absurdity of modern day life by forcing people to stop taking themselves so seriously and start having a good time 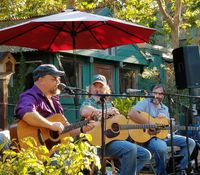 Songwriters Derek Bodkin, Scott Cooper, and David Hunt Cameron are going to be playing their original songs alone and together in an intimate backyard setting located in North Seaside, Ca.

This event will be held in Derek and Carolynn Bodkin's beautiful backyard garden known as the "Zen Garden Playground" located in Seaside, Ca. We’d like to invite you to bring your own beverages, picnic and snacks. If you enjoy wine, please bring a bottle of wine to share. We invite you to make yourself comfortable by bringing a chair, some tasty beverages, and some warmer clothes for when the sun goes down. (Best to wear layers)

There will be excellent quality desserts available for purchase from "Absolute Joy Desserts".

Doors will open at 5pm and we’ll start the music at 6. This event is limited in capacity to keep things intimate and close. Tickets are a $25.00 donation and can be purchased in advance via the following ways:

Or send a private message to musicyle@gmail.com and we can arrange an alternate way to a pay. Once you have confirmed attendance, we will send you the address.

Carpooling or cycling to this event is always encouraged though there should be plenty of parking available. Feel free to contact us with any questions, and we sincerely hope to see you there.

This backyard is wheelchair accessible.

We are all very excited to be sharing our original music with you! Here is a link to a brief glimpse of our last time playing together: Peace, David, Scott, and Derek

Derek will by playing drums with David Hunt Cameron & Friends.

Hovering Breadcat is back at our favorite winery! El Vaquero Winery has a fantastic outdoor space with a great stage, terrific food, and a fantastic selection of wine. Join us for a night of great tunes, dancing, and laughs. 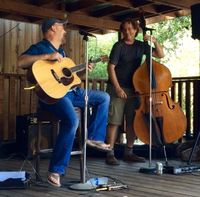 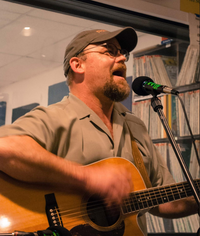 Derek Bodkin joins Michael Gaither for an impromptu night of tunes off the cuff. 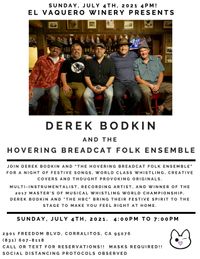 Happy 4th of July! Hovering Breadcat will be playing the El Vaquero Winery on Sunday July 4th, 2021 at 4pm. We're super excited to be playing our favorite Winery again... with the best wine, amazing audience, great staff, and terrific food available. Join World Champion Whistler Derek Bodkin as he is joined by Harry Thomas, David Welsh, Brian Vandemark, and Tommy Knowles for a festive night of Americana Good Times Groove. This will be a terrific part of any 4th of July. Please note - this is still a mask compliant event until further notice - so please bring a mask along. Let's help this wonderful new venue stay open! Bring your friends and come enjoy this terrific establishment. Show starts 4pm, Reservations are highly recommended. Bring layers just in case it cools off. 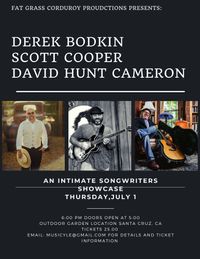 We’d like to invite you to a very special evening of music on Thursday, July 1, 2021. Songwriters Derek Bodkin, Scott Cooper, and David Hunt Cameron are going to be playing alone and together in an intimate garden setting very close to downtown Santa Cruz. We’ll be playing our own material, discussing where our ideas come from, and sharing some of the stories behind our songs. Afterwards, we’ll be hosting a campfire jam for all who wish to join in. Address details available with ticket purchase. 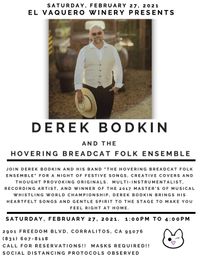 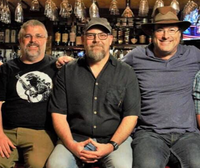 Please join Derek Bodkin as the Hovering Breadcat Trio (Derek Bodkin, Brian Vandemark and Tommy Knowles) at a new wonderful venue called "El Vaquero Winery". Excellent wines and food trucks on site. Super hip crowd and fun vibe. The start time is 4pm and music goes til 7pm. This outdoor venue is a Social Distancing Mask Compliant event. Please bring mask and wear when not seated. Lots of nice seating with plenty of view to the stage - call ahead for reservations though. Tables do fill up. Our friend, Phillip the Tip Jar, will be there. 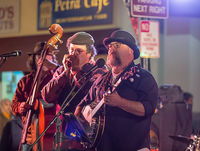 The HBC at Cooper's Pub!

The HBC is back at Cooper's Pub for a super fun Saturday! Join us in the Breadcat Clubhouse. Eat, Drink, Be Breadcat!

We're back for St. Patrick's Day at the London Bridge Pub in Monterey, California! Join us for our "Folked Up" versions of Irish favourites, Sea Shanties, unique covers, and thought promoting originals!

CANCELED BY COVID-19 - St. Patrick's Sing Along at Crédo Studio

Derek and the Hovering Breadcat folk ensemble are pleased and honored to be asked to perform at this beautiful community arts center. We will have fun, give a little history of some of our favorite St. Patrick's Day songs and play some of our fans favorite originals.

Great news!! Credo Studio will be serving Corned Beef and Cabbage . $5 donation for a HOT CUP. This is a family event and kids are welcome! We'll keep it family friendly!

Join us on Sleepy John Sandige's special 1200th broadcast of "Please Stand By" at 10:00am. We'll be promoting our popular St. Patrick's Day shows! 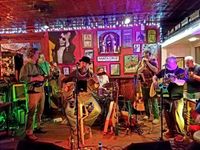 Sorry Folks - this show has been canceled by the venue due to COVID-19 concerns and a city wide statement to not allow gatherings of 50 or more.